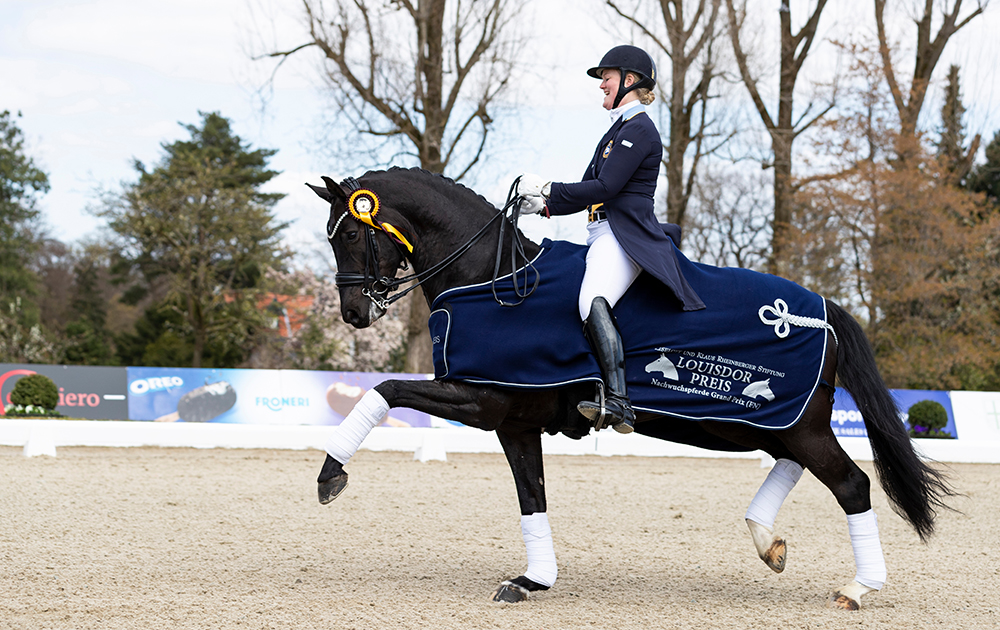 Hagen a.T.W. — The Bonhomme Stud team had planned from the beginning that the successful stallion Morricone should only compete in the qualifier. Not even the victory in the Inter II on Saturday could reverse this decision. This paved the way for the point equal second winner, Dedale de Hus OLD under Swedish rider Malin Wahlkamp-Nilsson. The Don Juan de Hus son, owned by Masahiro Kosaka, “stepped it up a notch” in the short Grand Prix today. A horse with a lot of future, steady in the piaffe and passage, always even and harmonious. The judges agreed and rewarded the pair with 74.674% and first place. Wahlkamp-Nilsson shared her joy, “He has so much fun with it, on the centre line he was almost too hot for me, I was still thinking, ‘Ho, wait’. He wants to do you every favour in the test, he’s a cracker to ride.” Anabel Balkenhol (Rosendahl) and High Five, bred by Dirk Ahlmann, finished second with 72.605%. The ten-year-old Hohenstein son cannot deny the classic Balkenhol training, always harmonious in the lateral profile and in front of the vertical. Fabienne Müller-Lütkemeier (Paderborn) and her future hope Valesco (Vitalis x Douceu) scored with very beautiful, collected pirouettes and took third place, 72.465%. The former World and European Team Champion has been training the gelding since he was four years old. She revealed, “Valesco has the stable name Schumi, always full steam ahead.” The first and second placed horses in the qualifier booked their ticket to the Louisdor Prize Final in Frankfurt in December.

In the morning, another Grand Prix at 4* level took place in the Almased Dressage Stadium. The Danish national anthem was played at presentations: Nanna Skodborg-Merrald and Atterupgaards Orthilia (Gribaldi x Donnerschlag) won the Prize of Roeckl Sporthandschuh GmbH & Co. KG, ahead of compatriot Daniel Bachmann Andersen with Marshall-Bell by Blue Hors Don Romantic on 72.935% and Beatriz Ferrer-Salat (ESP) with the Negro daughter Elegance and 70.565%.

Hagen was the first stop of Germany’s U25 Springpokal of the Stiftung Deutscher Spitzenpferdesport and the Müter family. Five riders had the chance to qualify for the final at the Aachen Soers and five riders also competed in the jump-off. Hannes Ahlmann (Reher) and the Holstein stallion Nerrado (Nekton x Acorado I) were focussed and attacked the line in the fastest time – 36.83 seconds was easily enough for first place. Marvin Carl Haarmann (Ahaus) and his Labonita OLD as well as Niklas Betz (Kirkel/Hagen a.T.W.) on Contan also left all the poles up, but were clearly slower. Manuel Feldmann (Thuine) and Marie Schulze Topphoff (Havixbeck) each collected a rail in the jump-off. The second qualification of the jumping series will take place in Mannheim from 2 to 4 May.

Horses & Dreams didn’t take place as usual this year, but under strict regulations and without any spectators on site. All competitions can now be viewed in the ClipMyHorse.TV archive.

Thrilling finish in the Prize of BEMER Int. AG

Victory in the Prize of the BEMER Int. AG was fiercely contested. Only eight of the 50 pairs managed to finish the first round without any penalties at all, 13 pairs went through to the second round in accordance with tour regulations. In the second round, notably Maurice Tebbel and Patrick Stühlmeyer (GER) delivered a spectacular run against the clock. He wants to win every Grand Prix, but Maurice Tebbel doesn’t always succeed either. “We prepared on Friday, the plan worked out, he performed brilliantly and I am super-happy,” Maurice Tebbel commented succinctly. The 27-year-old and his stallion Don Diarado took advantage of every opportunity as the last starters in the second round of the BEMER Riders Tour competition in Hagen a.T.W. and left the course as the winner. This was the first triumph for the rider from Emsbüren in a leg of the international show jumping series, which has been taking place for the 20th time since 2001.

” In the end I could have maybe done one canter jump less from fence two to three,” grinned the second-placed Stühlmeyer, who grew up in Osnabrück and practically had a “home match” at Horses & Dreams meets Japan Sport Edition. Stühlmeyer was third in the 2019/20 BEMER Riders Tour and drove home from Neumünster’s Holstenhalle with a brand new Land Rover at the time. “Varihoka du Temple is in a striking form at the moment, that has already been shown in the past days,” concluded a visibly proud Patrick Stühlmeyer.

This year, Horses & Dreams did not take place as usual, but under strict regulations and without spectators on site. Despite doubts, it was a successful event with a world-class line-up. “My team gave everything in this difficult situation to make this event as successful as possible, we are glad that we could do something for the sport” said Ullrich Kasselmann.