A special event for participants and visitors

Home  >  Pressemitteilung   >  A special event for participants and visitors 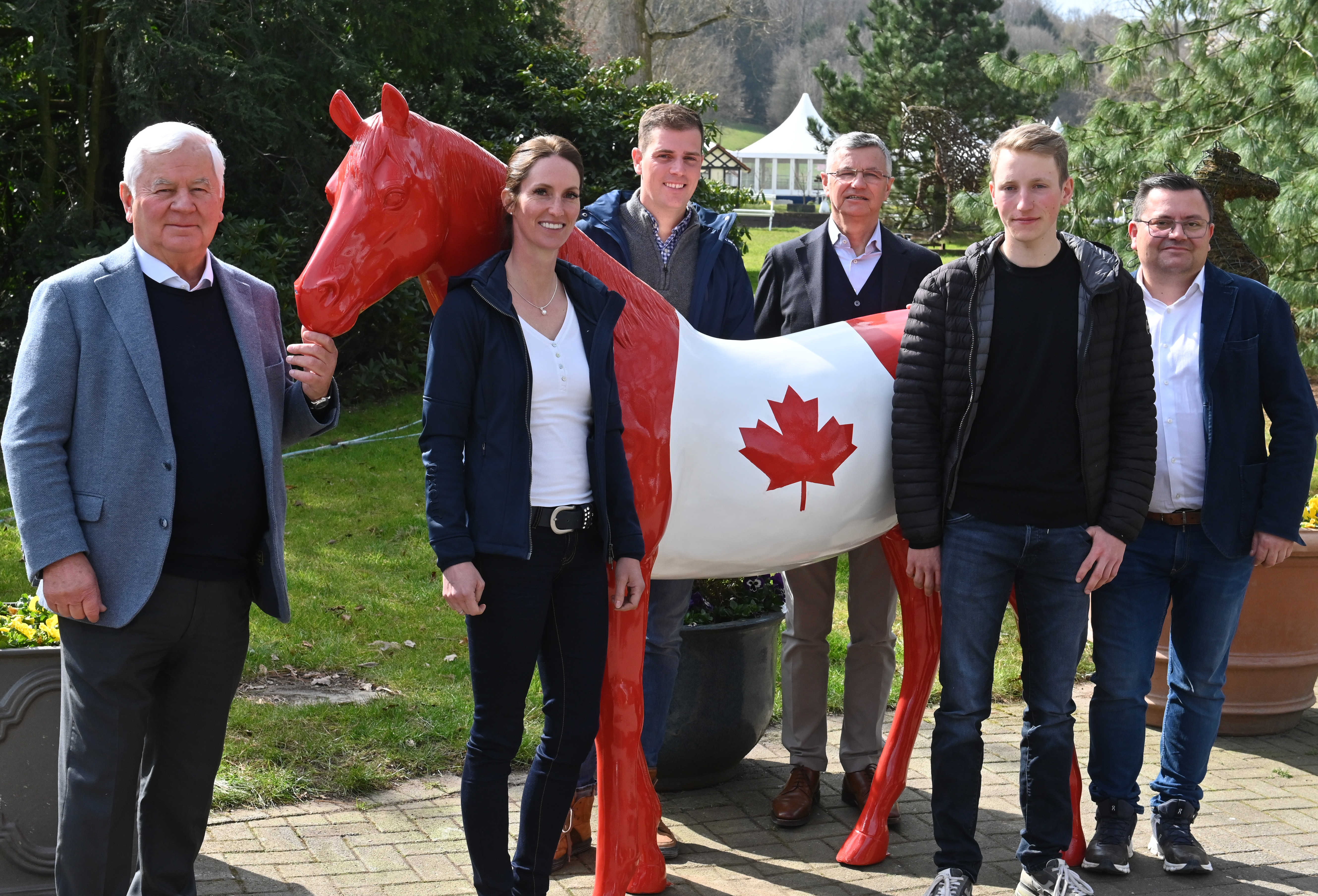 30 Mar A special event for participants and visitors

Hagen a.T.W. — Hagen a.T.W. – At Hof Kasselmann in Hagen am Teutoburger Wald, work is already in full swing in preparation for Horses & Dreams meets Canada, which will take place from 20 – 24 April. There are only three weeks left until this exciting event and the team of Horses and Dreams Entertainment GmbH has taken advantage of the beautiful weather of the last weeks to already set up some event infrastructure. At a first welcome press conference, media representatives and personalities from the equestrian world were able to get a first impression of this year’s event and sample a culinary “Taste of Canada”.

“We want to continue to present Horses & Dreams as an event and inspire visitors – not only with top sport, horses and riders, but also with the exhibition, the atmosphere and the entire Canadian flair, starting with the opening ceremony and the ecumenical church service, to many other activities. Some things are still in the planning stage, but the spectators will certainly go home excited and come back the next day,” assures Ulli Kasselmann.

Stars of today and tomorrow

The best dressage and show-jumping riders in the world will also be returning. In addition to the German squad riders, the first lists of participants include the top stars from Denmark, Sweden, Ireland, Great Britain, the Netherlands and many other nations. However, equestrian fans should also take a look at the list of horses: here you will see some names that could play a major role in the medal count at the Olympic Games in Paris. The special thing about Horses & Dreams, however, is not only the star-studded line-up on the show grounds, but also the proximity to the spectators. Equestrian sport to touch – here everything is deliberately shown and explained transparently, visitors should feel integrated.

Some of the most important chapters of equestrian sport have already been written at the Borgberg. Olympic squad member Frederic Wandres, highly motivated from a victorious season in Wellington, USA, wants to add his own story. With his top horse, Duke of Britain FRH and the new star in the stable, Bluetooth OLD, he plans to really attack again at his “home tournament”. World Champion Simone Blum (Zolling) also plans to do the same. She was just competing in Gorla Minore in Italy, and in Hagen a.T.W. she is planning to compete in the final of the BEMER Riders Tour: “I am happy that with Diachacco I have a horse that I can also ride in difficult jumping competitions. That’s why I also rode a 4-star test in Italy to prepare him for Hagen.”

In 2022, the BEMER Riders Tour will be held for the 21st time and a fresh wind is blowing in the tradition-rich series, from the revised logo to the international orientation and an expansion of the series concept. In addition to the kick-off at Horses & Dreams meets Canada, further stages in Germany, Belgium, the Netherlands and Austria are on the calendar of the “classic” Riders Tour. “We had very good talks with the Kasselmann family and Horses and Dreams Entertainment GmbH and together we decided to continue the very successful path of the last few years, but also to give the tour a new, younger and fresher image and to offer young talents as well as top riders a great platform,” explains Bernhard Bock, Head of Marketing BEMER Int. AG.

This is exactly what is happening with the new BEMER Young Riders Tour, which will be celebrating its start in Opglabbeek (BEL) in a few days’ time. The FEI Jumping Nations Cup Youth series, which is of sporting significance, forms the basis for the BEMER Young Riders Tour 2022. The eight qualifying stages in Europe include such well-known show venues as Gorla Minore (ITA), Zduchovice (CZE), Fontainebleau (FRA), Lamprechtshausen (AUT), Zuidwolde (NED) and Hagen a. T.W.. The final will take place at the Peelbergen Equestrian Centre in Kronenberg (NED). The three first-placed riders will receive a connection to the classic BEMER Riders Tour as a non-cash prize, the ranking leader will become “Young Rider of the Year”.

European U21 Champion Matthis Westendarp (Wallenhorst) confirms the great opportunity that the BEMER Young Riders Tour offers his age group: “This will definitely be one of my goals, it is my last year as a young rider. I have already planned the Nations Cups into my season, the new Young Riders Tour is another incentive to be successful there.”

The sporting significance and the special charm of Horses & Dreams were also clearly expressed in the words of national coach Otto Becker. “We have various goals this year, including two Nations Cup series, but the main goal is of course the World Championships in Herning. The course will be set here. We have a super starting field, from experienced riders and squad members to young riders. All the riders from the World Cup Final in Leipzig will be there. So it’s very important for us as coaches to get a picture and for the athletes to present themselves in order to be nominated.”

Online ticket sales started this week and have already received a great response from equestrian fans. The organisers are currently working with a 60 per cent occupancy of the event site, which is 14,000 visitors at the same time at the spacious facility, under 2G rules.