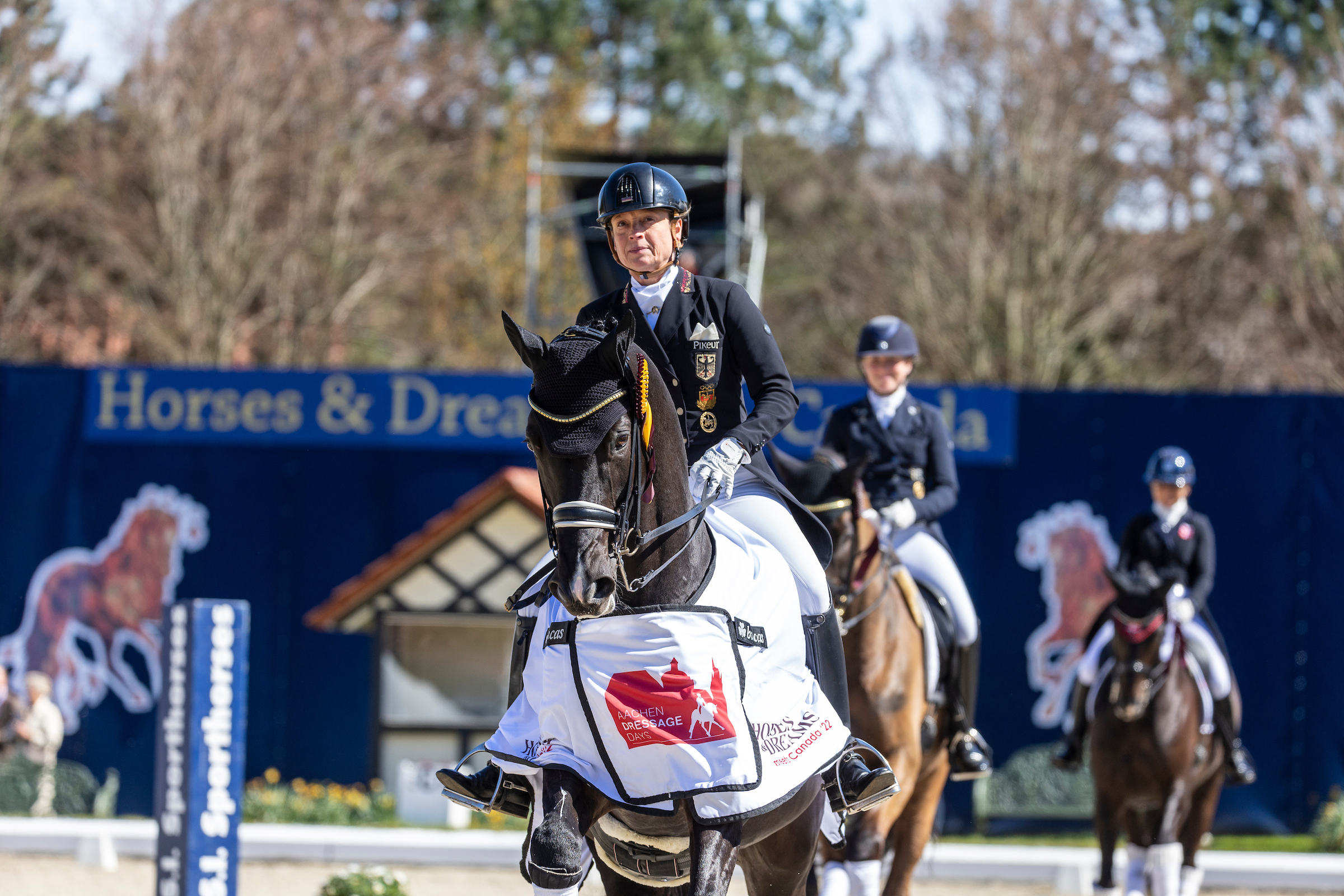 Hagen a.T.W. — Finally Horses & Dreams is here: the relief and joy at being able to present the popular equestrian festival, which is known far beyond national borders, in its usual manner was noticeable on the first day of the event among participants, partners, exhibitors and visitors alike. Many spectators took advantage of the free entry on Wednesday and enjoyed the glorious April weather. The sporting programme started in the dressage arena with the Grand Prix of the CDI3* Tour, presented by the Aachener Dressur-Verein e.V.. Dressage queen Isabell Werth (Rheinberg) showed her black future hope, Superb. The name says it all, in her first international Grand Prix start the mare already left the competition far behind; 75.783% was on the scoreboard at the end. Werth cannot hide her enthusiasm for the mare: “She has impressed me since the first moment I saw her in the warm-up arena in Verden. Thank God Mado (Madeleine Winter-Schulze) said ‘Bid again, again’ at the Elite Auction.”

In the big stadium, Benjamin Wulschner (Dahlen) and the Contender son Quidditsch led the lap of honour of the CSI2* warm-up jumping competition, Prize of Performance Sales International GmbH. They were clearly faster in the 1.35 m-rounnd than Marie Schulze Topphoff and Isafleur and Maximilian Weishaupt on Baloutano.

The lead-in class of the CSI4* Tour, Prize of Hof Kasselmann GmbH & Co. KG, was an exciting and international affair. Belgian Andres Vereecke claimed victory with D’Artagan Rr ahead of Robert Whitaker (GBR) on I’M Special Too Dhh and David Simpson with Foudre F. Best German was Philip Rüping with Miss Chacco PS from the Schockemöhle stable.

The finalists of the Amateur Tour of the Ankumer Dressur Club also met in the dressage arena. In this national test at advanced level, Anna-Marie Prahl won with Rock Lady RVL ahead of Pauline Bubanz with Lord Lancaster AH and Sina Eilers with Badoit 2.

Land Rover is an official partner of Horses & Dreams for the third time. The powerful models, especially the Defender with permanent four-wheel drive and high towing capacity of up to 3.5 tonnes, are a perfect companion for equestrian sports. In the course of the opening press conference, Isabell Werth was also introduced as the new brand ambassador. “In our field of work, you can never have enough space, so the Land Rover is really predestined. The driving experience is also unchallenged, it gives me great security and a really nice glide, that’s what I would like to call it,” Werth said.

Wednesday evening traditionally ends with the opening ceremony with a festive ecumenical service. This year, the theme is peace, and organiser Ullrich Kasselmann is particularly proud to have brought a very special mission to Hagen a.T.W. with the appearance of the Friedensglocken e.V. (Peace Bells Association). The horse-drawn vehicle with the 60kg peace bell, cast from war scrap from the Second World War, will be on display at Hof Kasselmann this week. The final destination, however, is Jerusalem on a horse trek in 2025. Together with the internationally successful Canadian dressage rider Naima Moreira Laliberté, Ullrich Kasselmann will also pour water into the Fountain of Nations as a symbol of peace and international friendship. It is Laliberté’s first start at Horses & Dreams, but she is already looking forward to a Canadian journey of discovery at the Borgberg: “I want to be surprised and get to know everything! But I also brought real Canadian maple syrup if anyone wants to try!”