NÜRNBERGER BURG-POKAL: Helen Langehanenberg has Frankfurt in her sights 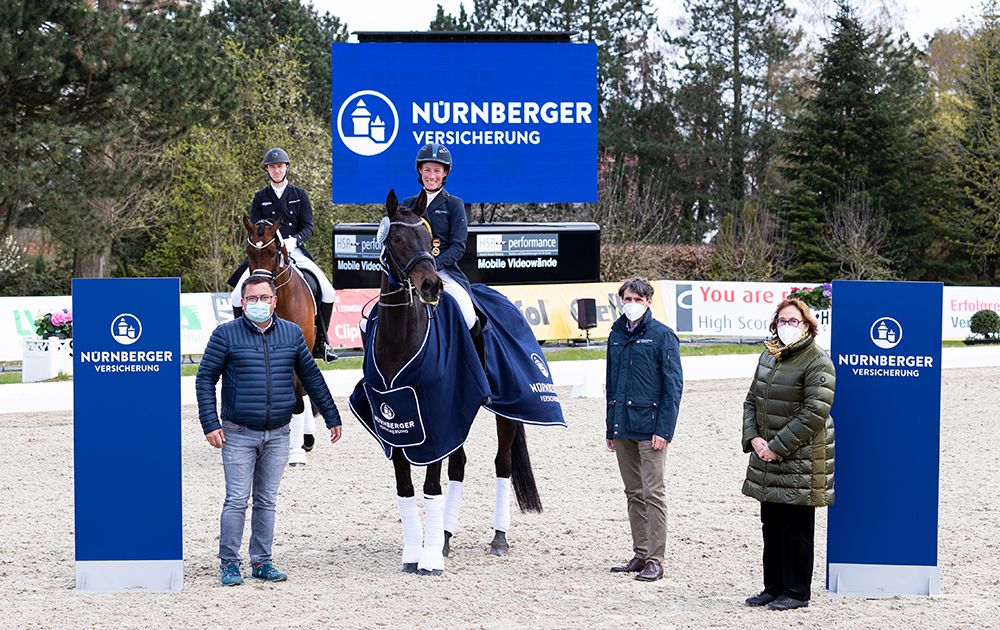 23 Apr NÜRNBERGER BURG-POKAL: Helen Langehanenberg has Frankfurt in her sights

The excitement continued on the second day of Horses & Dreams meets Japan – Sports Edition. In the Almased Dressage Stadium the day began with the warm-up test for the qualification for the NÜRNBERGER BURG-POKAL. This is the first of a total of twelve scheduled qualifications and 27 combinations accepted the challenge of booking one of the hotly contested starting places for the final in Frankfurt. Today’s winner can already look back on some major international accolades: Helen Langehanenberg (Billerbeck) had been in the lead for a long time with the Hanoverian mare Schöne Scarlett (Scolari x Londonderry) — until stablemate Straight Horse Ascenzione entered the arena. The US-owned, Danish Zack x Don Schufro daughter wowed three of the five judges with her light-footed, elastic performance and received 75.512%. This meant victory ahead of Schöne Scarlett with 74.171%.

In 2019, at Horses & Dreams meets France, Helen Langehanenberg also competed two horses, and finished 1st and 2nd in the final qualifier with Vayron and Frank Sinatra. It looks like she has a similar plan in 2021 with these two talented mares. The third placed rider, Sönke Rothenberger (Bad Homburg) with his only seven-year-old young star, Fendi (Franklin x Diamond) and the fourth placed rider, Therese Nilshagen (SWE) with her employer, Dressurpferde Leistungszentrum Lodbergen’s stallion, For Final OLD (For Romance I x Dimaggio), also earned a say. They too received high scores of 74.024% and 72.634% respectively. The 12 best combinations will return on Saturday in the Final Qualifier. This year the important NÜRNBERGER BURG-POKAL series celebrates its 30th anniversary. “I am looking forward to seeing how the weekend continues. It won’t be boring for sure, there is a lot of competition and I think that is very good for the sport,” Langehanenberg said about the strong turnout of the class.

In the CDI4* FEI Grand Prix, Preis vom Helenenhof – Familie Schwiebert, everyone was particularly excited about the ride of Charlotte Dujardin (GBR) and her young hope Gio. The eager KWPN gelding by Apache did not disappoint in his first performance outside of England: Dujardin knew how to use his energy well, the pair received many 8’s, especially in the Piaffe-Passage Tour. 78.761% were on the scoreboard in the end.

Tobias Meyer seems to be quite at home in the show jumping arena at Hagen. With Casithargos-H by Casino Berlin x Conthargos, the rider from RUFG Falkenberg e.V. won the second qualification for 5-year-old horses, Prize of Albert Kerbl GmbH, quite narrowly ahead of Karl Brocks Jr. (Waltrop) in the saddle of Consul E (Codex One x Cordalme Z).

In the second round of the 6-year-old horses, Prize of Allspan Spanverarbeitungs GmbH, Tobias Meyer on Celebrity – H, however, had to give way to Josch Löhden (Zeven) and Da Vinci (Diacontinus x Wanderer). The pair showed a fast clear round in 62.18 seconds.

The prize of the High Score Performance Ground, the CSI2* Medium Tour Jumping was won by Felix Haßmann (GER) riding SL Brazonado in the first division and Benjamin Wulschner (GER) with Chacclait in the second division. Second place went to Jan Wernke (GER) and At the top 2 and Clarissa Crotta (SUI) with Vincent respectively.

Kristaps Neretnieks Official (LAT) and Cerosino were the winners of the first CSI2* jumping event of the big tour at Horses & Dreams meets Japan – Sports Edition. They were the second-last pair to enter the course and were a whole two seconds faster than the British rider Scarlett Charles, who had been leading until then. The competition was presented by the ‘Osnabrück Boys’ and a special prize was awarded by the company Uvex.

On Friday the CDI4* Grand Prix, which is also the qualification for the first Grand Prix Special with music, continues at 8:00 a.m.