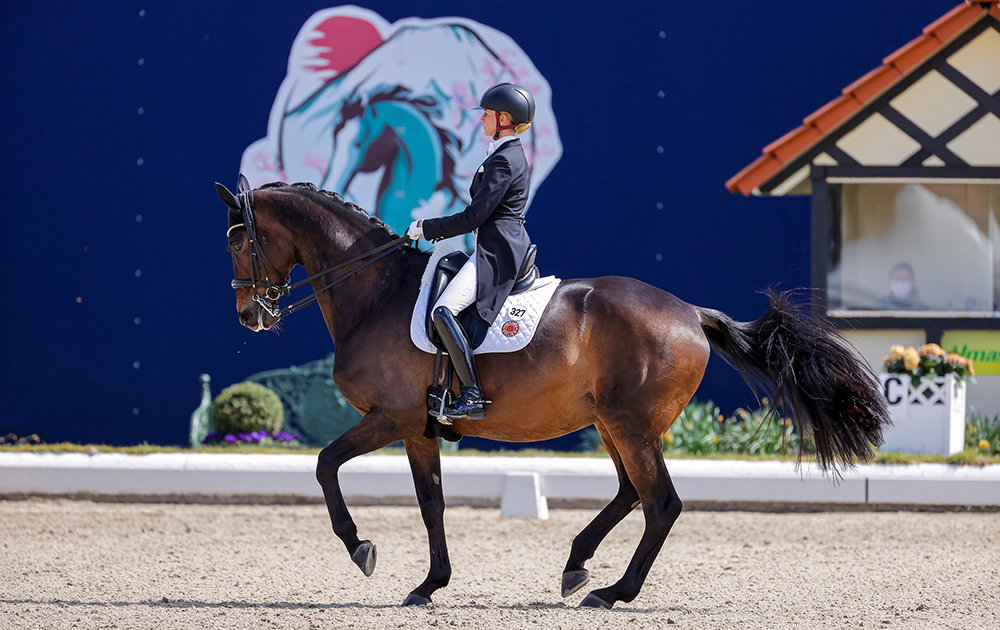 Hagen a.T.W. — It really was dressage at its best on Friday morning in the Almased Stadium at Hof Kasselmann. 32 pairs utilised the opportunity to test their outdoor form prior to the upcoming Olympic and European Championship selections. The second CDI4* Grand Prix of Horses & Dreams meets Japan – Sports Edition was about qualifying for the Grand Prix Special with music and two rides were rewarded with over 81%.

Yesterday Charlotte Dujardin (GBR) celebrated victory with her young horse Gio, today riding her top horse Freestyle she was narrowly beaten by another exceptional mare: Jessica von Bredow-Werndl (Aubenhausen) and TSF Dalera BB were in great form and scored a new personal best in the Grand Prix — 81.652%. The judges even awarded multiple 10’s for the Piaffe-Passage tour of the Easy Game x Handryk daughter. Dressage queen Isabell Werth (Rheinberg) came in third with 78.630% with her future hope DSP Quantaz. The Quaterback son once started his career in Hagen. At Horses & Dreams meets the Royal Kingdom of Jordan 2018, Sissi Max-Theurer discovered the stallion, then still under Ronald Lüder in the Louisdor Prize Qualifier. Isabell Werth was supposed to compete DSP Quantaz for her student Vicky Max-Theurer, but the new partnership proved so promising that Werth’s long-time friend and patron Madeleine Winter-Schulze bought shares in the noble bay and thus secured him for Werth. 76.652% was awarded to Benjamin Werndl (Aubenhausen) and Daily Mirror in fourth place. The best 15 pairs will compete in the Grand Prix Special with music, presented by Höveler Pferdefutter, on Saturday at 18:15 in the show jumping stadium.

Felix Hassmann (Lienen) in the saddle of SL Brazonado (SL Baluarte x Silvestre) and Jan Wernke (Handorf-Langenberg) on At the top (Armitage x Couleur-Rubin) continue to dominate the Medium Tour in the CSI2* of Hagen. First and second place in the Prize of the Master Painter Wahrenberg ahead of third and fourth placed Josch Löhden (Zeven) and Balena and Tobias Meyer (Falkenberg) with Hero of no Man’s Land.

Anyone who looked at the starter list for the qualifier for the BEMER Riders Tour 2021, Prize of the LVM Versicherung AG, already knew that it was going to be an exciting competition. Everyone was represented here, from up-and-coming young stars to long-standing champions. 91 combinations started over Klaus-Wilhelm Holle’s and Olaf Herrmann’s course, 14 were in the jump-off at the end. The fastest, in a time of 39.56 seconds, were Marco Kutscher (Riesenbeck) and Charco (Chin Quin x Darco). The 12-year-old Westphalian stallion has been trained by Kutscher for several years. Felix Hassmann and SIG Chaccinus, a descendant of Chacco-Blue, placed just behind in 39.78 seconds. Soren Pedersen (DEN) and Chico Z finished third with another clear round, ahead of Ireland’s Eoin Mcmahon on Chakra. The BEMER Riders Tour continues with the Prize of the BEMER INT. AG, the main jumping competition on Sunday.

Later in the afternoon, the 1st Final Qualifier for Germany’s U25 Jumping Cup of the Stiftung deutscher Spitzenpferdesport was on the programme. In the prize of the Derby Pferdefutter brand, 25 of the best young German riders under the age of 25 competed. In first place, Robin Naeve (GER) and Casalia R ahead of Hannes Ahlmann (GER) with Caracas.

This year, Horses & Dreams does not take place as usual, but under strict regulations and without spectators on site. For all those who unfortunately cannot be there this year – all competitions will be broadcast on ClipMyHorse.TV.